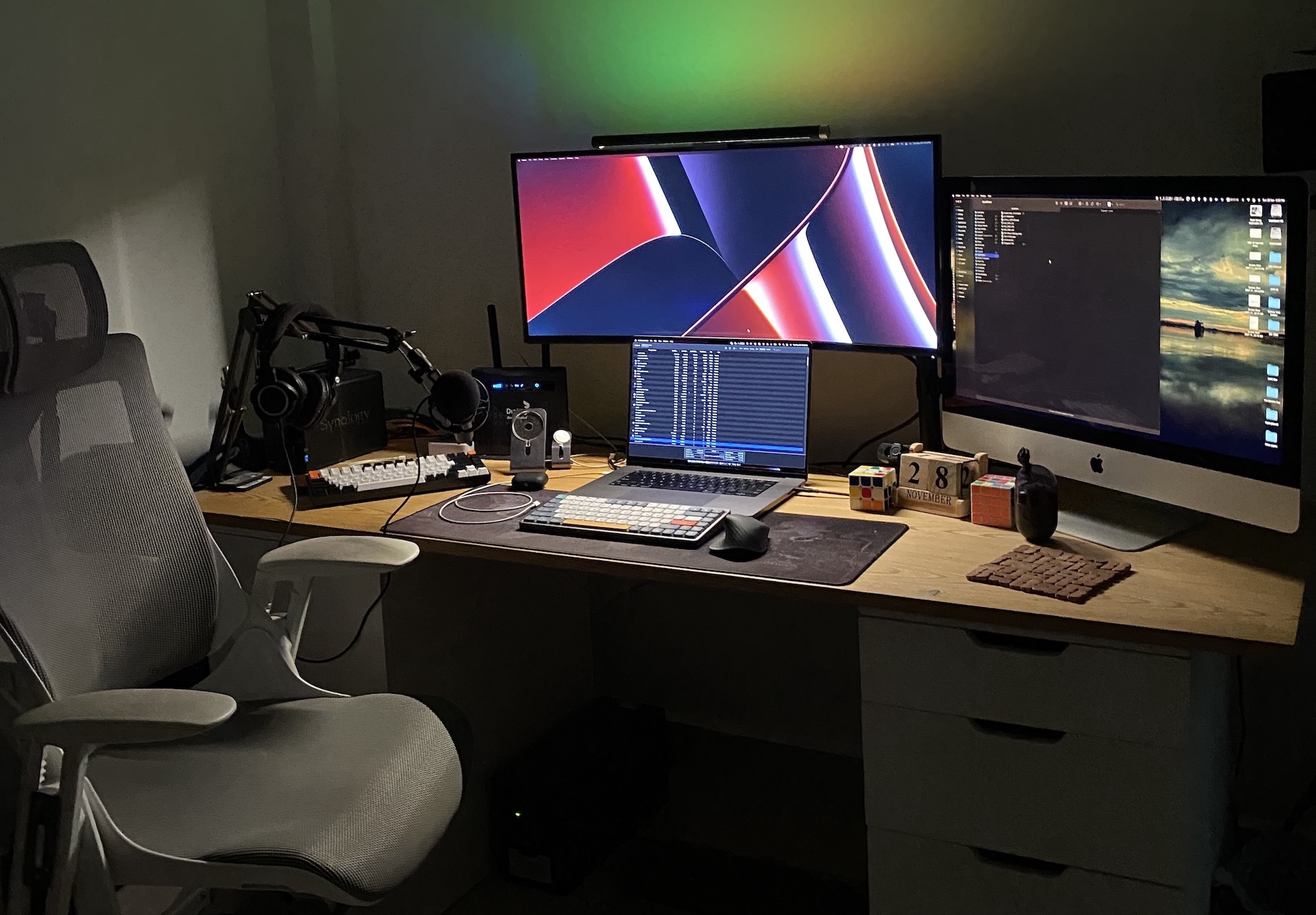 I have been working remote since 2015, yeah way back when it was hard to explain that working from home is a possibility. One of the essentials to make that a reality was to have a reliable work setup. The last thing you want to do is tell your client that you couldn’t complete the task because you had to troubleshoot some issue in the work setup. In my personal experience MacBooks have always delivered.

I’ve used Windows from 3.x to 7 with all the Millennium Editions, XPs and Vistas in between. Also I’ve managed a computer lab with 250+ windows machines while I was doing my bachelors as a part-time technical assistant for 4 years. Windows is a reliable OS but there is always that fear when you install a new software or even when you are been prompted to update.

Soon after I completed my bachelors in 2010, I was experimenting with a lot of dev stacks and also bootstrapping my web development agency Catalyst Interactive. At that point I realized that unless you are into .NET development Windows was not the best OS to experiment. So I switched to Ubuntu. There were so many Linux flavors but I loved Ubuntu because they used to post CDs with stickers. Who don’t like free stickers, isn’t it?

It went on for about 2 years and I accumulated a lot of knowledge, most of that came from watching video tutorials. One common theme those videos shared is the fact that they were recorded in OSX. Although the website I build or the end result was the same, it always felt like what you saw on the tutorial was better because of the polished cleaner UI that it accompanied.

My piggybank started to grow and I had enough savings to buy the “most affordable MacBook” back in 2012. But I always preferred the mid-tier product in Apple product lineup. Apple always packed a little bit of extra tech compared to what you pay for the base model.

So I bought the mid-tier 2011 MacBook Air 11″ and I had it attached to an external monitor to get more screen real estate. From the unboxing experince it continued to amaze me. Made me focus on what I’m working on rather than wrestling with reliability issues.

I used that machine for the next 3+ years, It was my travel companion, managed to deliver a lot of projects to my clients and keep up with everything I throw at it. As far as I can remember the only issue it had was weak charger brick, after few years the cable closer to the MagSafe connector cracked open. I grabbed a MagSafe from a 3rd party vendor and I started experiencing heat issues and also random electric shocks from the chassis.

At that time I had grown professionally and was in a pivoting point to decide if I should keep grinding or start working remotely and become part of a startup that’s doing great. It was 2015, I had my newborn daughter and I decided to become a working from home dad. So that I can spend more time with family and also work with world class developers.

I joined OnePulse, a market research startup based in UK. At that point I knew it was time to upgrade. Also I had an option to expense a dev machine and return it when I leave the company. So I upgraded to 13″ retina Macbook Pro, I wanted to get the mid tier but I couldn’t get approvals for it, therefore I went with the base model. Lucky me, after few months my MacBook Air gave up but I had already made my ROI (return on investment). Instead of selling it for parts, I’ve kept it with me as a souvenir.

For the next 1.5 years I was working remotely and started improving on my setup, bought a lot of tech to improve my audio quality, improve ergonomics. Visit this post for all the tech around me.

Time went by and MacBook Pro continued to impress me as I grew as a developer. I worked with OnePulse for 1.5 years and then they decided not to renew my contract (Mainly because they were prepping to cover more compliance requirements such as GDPR and the next series of investments). At the end of the contract, I negotiated with the company and asked them to let me keep it at current market value. Since there was a new Mac with a shiny Touch Bar and all usb-c stealing the spotlight, I managed to keep it at a good discount.

I was searching for work, freelancing, interviewing with some startup founders, trying to get back in the game but I was so lucky to get an interview with Modus Create. From the first intro, throughout the interview process I was impressed and realized this is the type of culture I want to become part of. After the long interview process they hired me and Ive been working for them since July, 2017.

I was part of one of the biggest engagements Modus had at that time, my project mainly focused on breaking down a legacy system and move to an architecture that can scale. There were loads of requirements and swift changes, and in the mean time devOps decided to go for a docker based implementation to keep everything consistent. The moment you introduce a 20GB MySQL test database and virtual environments it was hard for my MacBook Pro to handle, specially since it was the base model from 2 years ago and had only 8GBs of RAM. When I start my stack, the fans start spinning at its max and it was not the best experience.

After couple of months, I decided to move to a 27″ iMac 5K. The main reason was the ability to upgrade RAMs, But this time I got it with my own savings, so I had option to either buy more RAM or get the mid-tier. Guess what? I went with the mid tier with plans to do the RAM upgrade later.

Since the iMac had a bigger chassis and thermal capabilities it was running just fine. Few months later I did the RAM upgrade. I’ve been using it for the past 4 years and It is still one of the best machines to work. That 27″ 5K display is still unmatched when you consider the options available in the market.

Meanwhile after few months, I noticed an issue with my 13″ MBP. The coating on the Retina display started to fade and it started to look bad. I was already out of warranty and I wasn’t sure what to do about it. Then I did some research and found that Its a factory acknowledged issue and there was already a global repair program. So I contacted a local authorized reseller “FutureWorld” who could handle warranty on behalf of me. Also at that time I noticed that there was a rattling noise in one of the speakers and asked if that can be replaced too. Speaker was a $70 part replacement and they said I’ll have to leave the machine with them for about 1-2 weeks since they have to submit support documents to claim the Retina display replacement. Since I had the iMac it wasn’t an issue and I asked them to proceed.

After a week when I went back to collect the MacBook it looked brand new. I was expecting a display replacement, but it was a complete replacement of the entire top lid. I was already a big fan of Apple products but this just made me a super fan.

Time went by and I had no real use case for the MBP until 2020, and the pandemic started. Then I gave my MBP to my 5 year old daughter to do her online studies. In 2021 I sold it and got her an iPad. That made more sense for her use case, specially since it holds more battery and portable.

So what’s next? Apple introduced the M1 in 2020 and from the get go I knew this is what I’ll have to move towards once its mature enough. So I was waiting for the M1X/M2 on a bigger proper MacBook Pro.

Apple released the 14″/16″ MacBooks and I was already convinced. The criteria I had was, If it can match the performance of my 2017 iMac 5K and can get me a full days work without issues, that’s enough. My tech stack had grown and also I was looking into more flexibly in my work setup, where I can move around the house or travel when I’m bored. You know how boring it can be during lockdowns.

14″ MBP mid-tier (un-binned) with 1TB was my perfect match. I wanted to place an order but couldn’t find it locally. Then I reach out to few suppliers and the shipping dates were crazy. It was pushed almost closer to end of the year. Then when I checked there were 16″ for immediate purchase and to ship to Sri Lanka, they come with unbinned chips anyway and for an extra $200 it packs a lot of features such as 2″ bigger screen, better cooling, slightly better speakers, charging brick, etc. Then I was stuck deciding if I should get the 32GB for $400 extra or 1TB for $200 extra. After giving it a lot of thought decided to get the standard mid-tier 16″ MacBook Pro M1Pro with 1TB. Although 32GBs will future proof the purchase, I’ve enough experience to believe that the only way to future proof is to sell it off at a relatively small loss and upgrade every 2-3 years.

According to the Geekbench results from both of my machines, It shows that my the MBP has similar GPU capabilities and nearly 4X boost in CPU performance. You may compare my results at https://browser.geekbench.com/user/66935

Overall I am happy with the purchase, I am yet to decide what to do with my 5K iMac. That sleek display is a timeless design and would be great for years as a backup setup.

This site uses Akismet to reduce spam. Learn how your comment data is processed.

Hi, I am Haneez Haroon. I am a full stack web developer. This is my personal website. Thank you for visiting!